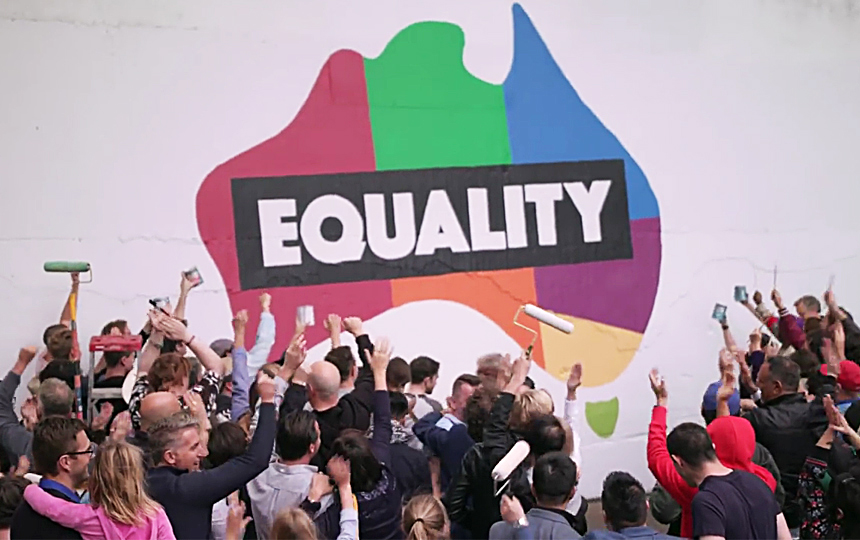 Australian Marriage Equality has just released an ad as part of the Equality Campaign.

The campaign aims to achieve marriage equality together as a nation, through a free vote in parliament, not a plebiscite.

The ad, shows families, couples, friends, young and old, from all corners of the country coming together to paint a rainbow Australia on a blank wall, writing things like ‘for my mums’, ‘for fairness’, ‘for commitment’ and ‘for love’ in the process.

“The Equality Campaign is about building on the momentum and energy generated across the nation for marriage equality and continuing to campaign for a straightforward change to be achieved by a vote in the parliament,” co-chair of Australians for Equality, Anna Brown told Huffington Post.

“This campaign is about putting the human face of the issue back in the centre of the discussion. It is based on the importance of human stories and the message to LGBTI people, their families and friends that collectively we can be the agent of change.”

Many have already tweeted their support for the campaign, including Birds of Tokyo, who provided the soundtrack for the recent ad.

Everybody should be allowed to love + marry whoever they like. Cheers to @AMEquality for digging Lanterns- we’re with you, #equality for all https://t.co/B9G1s9wjU1

The campaign comes as politicians continue to push for a plebiscite on marriage equality, something that will be harmful to the mental health and well-being of LGBTIQ+ Australians.

Take a look at our videos: Rally for Marriage Equality in Australia and LGBTI+ People Talk About the Plebiscite on Marriage Equality to get a better idea of where most Australians  (60% according to a recent Reachtel Poll) stand on the issue of marriage equality.

To find out how you can support the campaign, click here.

The Equality Campaign is currently working in unison with the ‘Say I Do‘ campaign. The ‘Say I do’ campaign used The Equality Campaign’s logo to also promote marriage equality in Australia. They currently have support from big name stars such as Margot Robbie, Dolly Parton, Ian McKellan, Kylie Minogue and Sia.