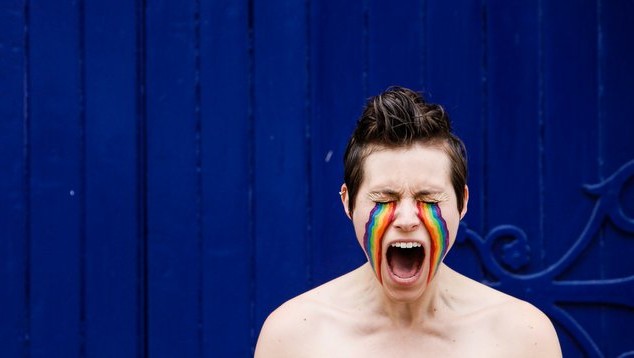 Born in Washington State and raised close to the Canadian border, Ren has been performing for a long time, acting in theatres from the age of eight or nine, and studying theatre and psychology at university. Ren came out after ze moved to Vancouver in British Columbia at age 18, and considers hir identity to be reformed around Canadian values. Having lived in Australia & New Zealand for almost two years though, ze feels this part of the world is as much like home as that part.

We had the chance to talk to Ren about what to expect from hir upcoming show in Perth, the importance of pronouns, how identities in the queer community have changed of the past 10 years and MUCH MORE. Take a look!

The QA: Firstly, how did the idea for the show come about? It’s such a great concept!
Ren: Thank you! It woke me up in the middle of the night from time to time and I would write down whatever I could. After a few months I had enough content that I started to see a show in there.  It was probably fueled by the fact that my identity had changed around my sexuality/gender AGAIN and I had no idea how to explain these changes in the LGBT community or outside it. It felt easier to just answer everything with “I’m queer as fuck!” The defensiveness I experienced was familiar, and darkly hilarious. I stopped crying about it, and started laughing about it.

The QA: How long have you been performing the show for and what have you learned whilst creating and performing it?
Ren: It’s new! It premiers in Perth! I’m breaking it in here with four weeks of shows and then taking it to Adelaide, Dunedin, Whangarei, Auckland, Toronto, and Vancouver (and hopefully others). I think the show has helped me to fully own my experience. I’m learning how to risk more all around as a writer and performer with the help of some really fabulous queer and allied support.  I’m really excited to learn more about my audience, other gender-queer and non-binary folks’ stories, and anyone who has had to work hard to get a sense of belonging and is ready to have a good laugh about it.

The QA: Part of the title of your show includes the pronoun ‘ze’. Can you talk a bit about your decision to include this in your title, and also the importance of pronouns generally?
Ren: I identify as genderqueer, and the show chronicles a variety of my “coming out” experiences including this one (which is the most recent). That’s possibly due to the fact that it’s a fairly recent identity to have. Queer community has changed a lot in the last 10 years that I’ve participated, and we keep coming up with different labels for things. Sometimes these labels are great summarizing devices, and sometimes it’s just another box we get cozy in. (boxes are cozy, limits are not!) Then almost immediately, we help other people get in the boxes we’ve chosen for them. This seems pretty opposite to the diversity we supposedly celebrate. It was my director’s idea to include the word Ze in the title because if you’re in the know, you’ve heard of it as a gender-neutral pronoun. And if you’re not in the know, you’ll read the title, see the image, hopefully go to the show, and find out!

The QA: You’ve described your show as a one-person, genderqueer, kinky, femmesexual, polyminded, gay-divorcee PRIDE parade through the real life of Michelle/Ryan. This sounds amazing! Can you explain what these identities and terms mean for you personally?                                                                                               Ren: Genderqueer: my gender identity is sometimes man or woman, but it’s mostly both/neither. I don’t fit the man/woman binary in terms how I see myself in the world and the roles I assume when interacting with people. I am queer in all of my romantic relationships, which is to say: I’m attracted to queer people who do not have a heteronormative or gender-based script for relating. Kinky: I safely, sanely, and consensually play with sexual/psychological taboos. Femmesexual: I’m attracted to personalities that are feminine of center in how they relate to the world. Poly-minded: I am perfectly capable of having more than one loving relationship at a time. I might be monogamous at various times for various reasons, but I don’t have the delusion that any one person can meet all of my personal needs, nor that I can meet all of theirs and I don’t want them to go without! My successful relationships are an arrangement by mutual agreement in which anything (including openness) is on the table for empathy and accommodation or peaceful dissolution. Gay-Divorcee: I am divorced from my ex-wife. Married is as much an identity as anything else, especially gay-married. We pretend it’s the same as straight marriage, but it has a significant difference. It has been fought for, rallied for, voted for, and defended to the likes of family, religious organizations, co-workers, acquaintances, strangers, and the government. It has a kind of weight and pressure to succeed I don’t think heterosexual marriages have. Gay divorce turns a queer-love-success-story into a queer shame fest and no one wants to touch it. The same scripts that weren’t there to build the relationship aren’t there to help grieve it. It’s an incredibly isolating experience I don’t wish on anyone.

The QA: What can people expect from your show on the night, and how do you keep audiences entertained as a one person show?
Ren: People can expect a full range of emotions as they go through my episodes of discovery. It may make you laugh and cry, and then laugh again. I hope performing it will give people an experience of the radical belonging and acceptance they might have lost touch with since their coming out days, the same feeling they revisit every year at pride. Humans, even queer ones, get a bit inflexible about their ideas over time if they aren’t challenged. I’m a challenge. With solo shows I think what keeps people most entertained is risk and play. If I can risk it all and manage to be playful about it, I think the audiences will stick around for the journey.

Ren’s first performances fom January 24- Febrary 7th are listed as previews. They are cheaper and you will have the freedom to hang around and chat with Ren at the end of the show, something which won’t happen in bigger venues. Shows are still in need of door volunteers. If anyone wants to play front of house for Ren they can have a free ticket and a drink! Contact hir via Facebook or Twitter (@MichelleLunicke).

Additionally, ze will be busking around Perth as a genderqueer statue to advertise the show. Places and times will be announced on Twitter (@MichelleLunicke). Go and watch hir pose and drop a coin or take a flyer to bring hir to life!