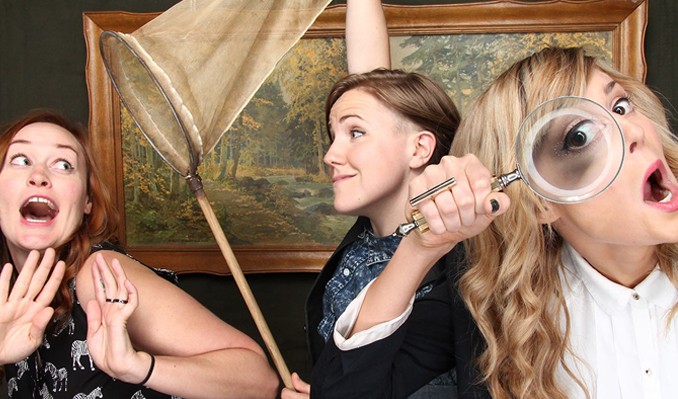 Hannah Hart is a lot of things. She’s an award winning comedian, a professional YouTuber and Internet personality. She’s an actress, producer, philanthropist and New York Times best-selling author. All of this and she hasn’t even reached 30 yet! Most would probably know her best from her My Drunk Kitchen series on YouTube (for which she’s won multiple awards).

She’s currently touring Australia as part of the #NOFILTER Live show with friends Grace Helbig and Mamrie Hart. I had the awesome opportunity to talk to the very talented, funny and hardworking Hannah Hart about the show and more! Take a look below.

TheQA: So is this going to be your first time in Perth? I remember the first time you announced you were coming to Australia a few years ago and there was no Perth visit. I was so devastated!

HH: Yeah well last time we were in Australia it was just me and Mamrie and we were traveling with a group called Contiki, and I was doing it just making videos about each place that we went to.

TheQA: Is there anything you missed out on the last time you were in Australia that you want to try this time?

HH: Well unfortunately we don’t have any time to do anything!

HH: Yeah, we land in the mornings, we do the meet and greet, then we do the show and then we fly to the next city then we land in the morning, do the meet and greet and the next show. You know that’s it, that’s how we’ve kinda been getting through it. I love Australia though. I want to just come back and like spend a week here, not even for work but just on vacation just to travel around and explore this awesome country.

TheQA: You’re touring with Grace Helbig & Mamrie Hart for the Australian #NoFilter tour. How do you think it might be different from the touring in the US/Canada and are there any exclusive to Australian audience experiences?

HH: Yeah you know, three garish north American accents *laughs*. I think it’s different, I don’t know. We really just seem to be vibing with Australians you know. Like, I feel like the laughs we’re getting, sometimes Americans can be a little bit withholding in their laughter, but I feel like we’re just getting these big boisterous laughs at these shows. We’re just having such an incredible time and I’d like to think that’s because Australia, we just get each other.

TheQA: What can we expect to see from the #NoFilter show generally? I hear there may be a fan fiction enactment in there somewhere?

HH: Oh yeah! *laughs*. The show is a variety of singing and games and comedy. It’s a variety show, it’s really a lot. And then at the end we like to close it out with a nice little fan fic BUT Perth will have to wait and see and buy tickets and attend!

TheQA: How is touring by yourself different from touring and performing with a group?

HH: Well you know it’s funny because it doesn’t even feel like touring in a group, it just feels like touring with my friends and that’s awesome because Mamrie and Grace are both incredibly hilarious and they really just make me laugh so much so it’s really nice to have them as kind of your companions on the road. You can get a little tired, it can get a little exhausting and it’s just nice to have them along for the ride.

TheQA: You’ve come such a long way since you first started making YouTube videos. Can you talk a bit about the work that goes on behind the scenes and the work you’ve had to do to get to where you are today? More specifically what goes on behind the scenes of the YouTube videos you make from start to finish. How long does it take you to make, to edit etc?

HH: Well I’ve been on YouTube for about four years and depending on the video, it used to take me just hours and hours and hours to edit and now it’s much faster because I’m a much more experienced editor. That just comes with time and learning curves and getting Final Cut 10 instead of I movie. So I guess that like, behind the scenes, consistency for me has always been the hardest part because I just want to experiment with so many different things and do different things and it took me about a year and a half to really commit to being like, no I’m posting videos every Thursday and then from there I committed  to posting videos every Tuesday and Thursday. So that was really just like a lesson in self discipline.

TheQA: How do you think that experience might differ from someone who is straight, or someone who might not be out?

HH: I think I’m lucky, I think I’m really blessed because I have the support of the LGBTQ+ community and that is awesome! You know, I feel like I’m a member of this big family and it feels really really nice to have and entire community that’s kind of rooting for you. I think that arguably you could say straight people are the rest of the entire world but I feel really loved and supported by my LGBT peers and partners.

TheQA: Do you have any advice for others who might want be out and work on YouTube?

HH: Just do it, always be out. Be like, hey here’s a heads up, I’m gay. Share your story, you know, or don’t. Don’t be in the closet, be open, but I feel like some people don’t feel like they need to come out, they’ll just be a gay person. Like, Tyler Oakley has never posted a coming out video you know. So I would say if you’re actively choosing to make non romantic content or not talk about a certain aspect of your life or something like that, because you’re afraid of people knowing you’re gay, then you should probably just come out.

TheQA: What would you say your career highlight has been so far?

HH: The fact that my career exists at all *laughs*

TheQA: Is that your full answer? That’s a good answer

HH: Exactly, I have the best job in the world.

TheQA: What is your favourite pun and why?

HH: Oh my God I don’t think you can pick. But one I used a lot is ‘let’s taco bout it’. I love tacos. Man I would love to have a taco right now.

HH: I’m a morning taco person. I could totally go for a breakfast taco!

HH: My favourite alcoholic drink, ummm. You know I guess it’s ‘less than before’ is my answer because I’m 29 now and I just can’t drink the way I used to to be totally honest. My body is getting older.

HH: I’m a big fan of tea in general. I really like tea, all different kinds of tea and in terms of coffee I really like cappuccino.

HH: Cheese. Cheese on Mac and cheese, cheese inside a breakfast taco. Cheese is really like the binding agent that makes me love all food in general.

HH: Oh, I mean they don’t have names. It really depends on the photo you know. I think the slow motion is quite funny but I never really find the right time to use it.

TheQA: Were you a fan of the rainbow vomit?

HH: Oh of course, you mean the faces? Yeah. It’s always more fun to do than they are to watch, like ohh they’re going through the faces, let’s click through them.

HH: You know Whoopi Goldberg was really rad. Basically I’ve had the privilege of working with a lot of celebrities and they’ve all been, really just wonderful people, and Whoopi Goldberg is one of them. I think she stands out. She was just a total pleasure to work with.

TheQA: On that note, I don’t think I’d be a real Harry Potter if I didn’t ask this; What was it like to meet Daniel Radcliffe?

TheQA: You became YouTube famous quite by accident. Did you think after uploading a video of yourself cooking & drinking, you’d be where you are now; making videos for a living, meeting and working with other celebs and touring the world?

HH: Not even slightly at all. I think the difference between 2011 and 2015 is that, quote unquote, being a YouTuber is a career and people can see it and be like, oh I want to become a YouTuber. But 2011, I really had no idea what this would become. The only thing I thought might happen, the only thing I wanted to get out of it was publishing a book. I wanted to publish a book.

TheQA: And you’ve done that!

HH: And I’ve done that yay!

TheQA: How do you like to show your fans you appreciate them? You seem to have quite a close relationship with your fans. How do you maintain that level of closeness with them?

HH: I don’t know. I mean it’s not really a conscious thing. I guess I would be curious to know what makes them feel close to me because it’s not a conscious action on my part you know what I mean.

TheQA: For me I guess it would just be, you seem so interested in your fans and you seem like such a nice and down to earth person so I guess that’s a good place to start. It makes people want to know more about you. As a fan myself I’d say that’s what it is like for.

HH: Ok good there you go *laughs*. Maybe that’s what it is.

TheQA: What can we expect to see from you in the near future after the #NoFilter Australian tour is over? Based on your Snapchats you’ve got something interesting in the works!

HH: Well hopefully Electra Woman and Dyna Girl comes out, I’m really excited about that. That’s coming in the near future I can say that officially.

HH: Get tickets to the #NOFILTER Perth show! We came all the way to Perth! *laughs*

Thank you to Hannah Hart for taking the time to taco bout it with The Queer Av.