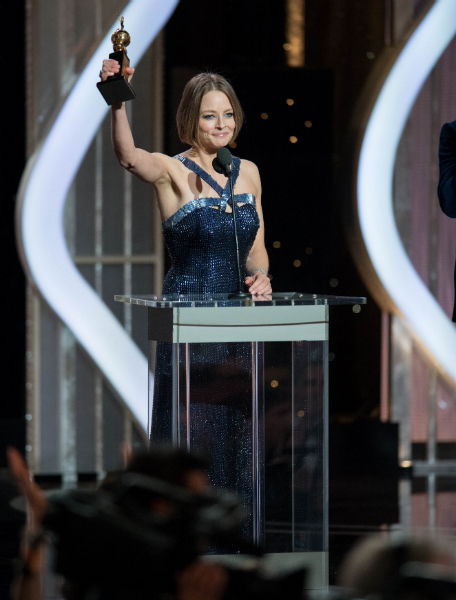 Jodie Foster’s sexuality is a trending topic after her recent Golden Globe coming out speech.

Her sexuality has been assumed for years, though on Sunday January 13 when accepting her Cecil B. De Mille Award at the 70th Golden Globe Awards, it was confirmed.

“So while I’m here being all confessional and I guess I just have a sudden urge to say something that I’ve never really been able to air in public, so a declaration that I’m a little nervous about,” said Foster

“I’m just going to put it out there, right? Loud and proud, right? So I’m going to need your support on this. I am single.

I hope that you’re not disappointed that there won’t be a big coming out speech tonight because I already did my coming out about a thousand years ago back in the Stone Age in those very quaint days when a fragile young girl would open up to trusted friends and family, co workers and then gradually, proudly to everyone who knew her, to everyone she actually met.”

She went on to talk about privacy and the expectation put on celebrities.

“Now apparently, I’m told that every celebrity is expected to honor the details of their private life with a press conference, a fragrance, and a primetime reality show.

So I guess you could say it was not a coming out as such? More a statement that celebrities shouldn’t have to make the details in their life official to the public.

Either way though, all I kept thinking through the whole speech was..”Is she even allowed to be up there that long. Shouldn’t they be forcing her off the stage with music right now?This is one mighty long speech!” I guess if your name is Jodie Foster, the rules can be bent…(excuse the pun).

Kathy Griffin: “I’m a big #JodieFoster fan, especially 2nite. Her speech tells LGBT youth: America has evolved, b proud of who u are!”

Lena Dunham: “The highlights of my evening (aside from the obvious) were Bill Clinton and Jodie Foster. Also seeing Adele turns out to be like seeing G-d”

Marlee Matlin: “Jodie Foster at the #GoldenGlobes. Pure Jodie, rightfully defending her privacy while doing it with brains and a smile. She is pure class.”

Chelsea Clinton: “Thank you #JodieFoster for your sharing your grace & grit over 47 yrs, and most of all tonight. #AnExample #GoldenGlobes”

Ricky Martin: “Jody Foster On your terms. Its your time! Not before nor after. Its when it feels right!”

Melanie Griffith: “‘@katebosworth: “Normal is not something to aspire to, it’s something to get away from.” – Jodie Foster’. Awesome!”

What did you think of the speech?