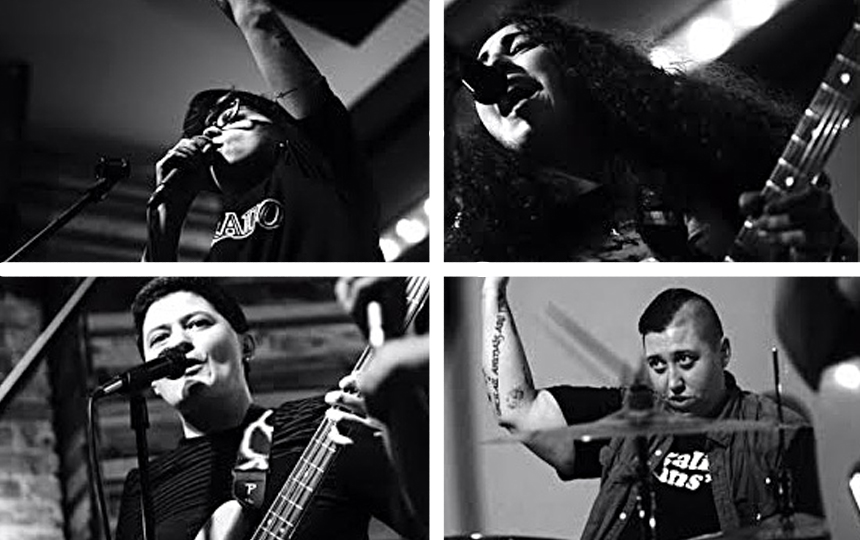 Ryan Cassata & The Rhythm formed in July of this year, the by-product of connections formed through college, social media and the Long Island music scene. With a rock sound, a passion for music and some studio singles in the works, I’m not surprised if you think this band sounds a lot like the many others out there. This however, is not the case.

The thing that sets this band apart are its members, Ryan (singer, acoustic guitarist, harmonica player) , Jordi (electric guitarist), Destroy (drummer) and Acadia (bass player). They are all amazing musicians, and they ALL identify on the trans spectrum. Trans visibility is continually increasing but still low, so to have an all trans band making some noise in the music scene is amazing, and up until this point more or less unheard of!

Lead member Ryan Cassata is well known as many things; a singer-song writer, actor, YouTuber and LGBTQ activist. We had a chance to ask Ryan a few questions about the newly formed band, trans visibility and projects in the works.

What does your band name mean and where did it come from?
Basically, Jordi, Acadia, and Destroy make up the rhythm section of the band so that’s why we call it the Rhythm and I also had a record called “The Rhythm” so it’s from that too.

How would you describe the sound/genre of your band’s music?
Well, we play a lot of different genres. We mostly do rock, and we do some country, and hip hop as well. Some of the songs are quite poppy as well. So it really varies. We try to switch it up.

Where do you draw your music inspiration from?
I draw my inspiration from real life events. Basically, anything that has happened to me, life events, relationships, friendships, role models, family, inspires me. Everything around me in used for inspiration. I’m also deeply inspired by Bruce Springsteen, T.Rex, The Get Up Kids, Led Zeppelin, Alkaline Trio, and Macklemore.

How long have you known each other as individuals, and when did you decide to form the band?
Jordi and I have known each other for a really long time and we met in the long island music scene at shows. Jordi and Acadia knew each other through the college scene. I met Destroy on Twitter earlier in the summer. We started as a band in July.

You all identify as transgender. How important do you think it is to be open and visible about your identity in the music industry?
It’s really important so that we can reach people that are struggling or feel alone. We put ourselves and our identities out in the open so we can reach more people. So far it’s worked.

You must be one of the first all trans member bands out there making some noise. How does it feel to be breaking into new territory and bringing a new level of visibility to the trans community?
It feels incredible. We are truly blessed. We hope to do bigger things also.

What projects do you have in the works at the moment?
Currently, we are in the studio recording a couple singles. We have 1 song done so far. The band sounds really tight and great together. I’m lucky to play with such talented people.