The other day, I was called a “transtrender” by a trans woman who refused to acknowledge my gender identity because I have, up until this point, not hormonally transitioned.

Because the only thing that determines your gender identity is, you know, hormones (sarcasm).

A “transtrender” refers to a person who identifies as transgender because they think it’s cool to do so. This particular trans reader insisted that I was not a “true” trans person, and that I claim this identity only because it’s the trendy thing to do.

This isn’t the first time my transness has been called into question, but there’s something particularly sinister about this word that made me angry.

Here’s the funny (and sad) thing about a trans person calling me a transtrender: They aren’t just hurting me. They’re hurting our community, and undermining our cause.

There’s a lot of problematic implications that go with the term “transtrender.” It implies, for example, that a person’s gender identity is for outsiders to decide. It suggests that there is only one way to transition. It marginalizes a significant number of trans folks who cannot access or do not want to medically transition. And further, it closets trans people who may feel fearful of rejection by the community.

It says to cis and trans people alike, “Your gender identity is for me to decide, not you. And if I don’t like what I see, I don’t have to acknowledge your truth.”

This is funny to me because this the exact same thing that we, as trans folks, are fighting against. We’ve had gender, incorrectly, imposed upon us from birth. Aren’t we fighting for the ability to live our truth and express our (a)gender without outsiders forcing us into roles without our consent?

“Transtrender” is a perfect example of the hypocrisy that I’ve encountered in the trans community from time to time. We don’t want others to dictate what our gender identities are, but we’ll ostracize other trans people and invalidate them because they don’t fit into our newer, shinier boxes. We don’t want to be misgendered, but we’ll misgender other trans people because their transition looks different from ours.

We don’t want to be told our identity is a phase, a trend, or a lie, but we’ll turn to our trans siblings and tell them all of those things without batting an eye.

If trans liberation is just a duplication of the oppression I was facing before – being told to express my gender on someone else’s terms, to someone else’s specifications – I’ll pass, thanks.

If trans liberation is putting each other down and invalidating our identities because we don’t want hormones, we don’t need hormones, we can’t afford hormones, or we aren’t ready for hormones – I’ll pass, thanks.

If trans liberation is letting outsiders tell us what our gender is, creating new restrictive boxes instead of getting rid of the boxes altogether – I’ll pass, thanks.

If trans liberation is creating hierarchies in our community, measuring someone’s worth on the basis of what (often inaccessible) medical interventions they’ve accrued – I’ll pass, thanks.

If trans liberation is conforming to a certain idea of what gender should look like – yeah, I’ll pass, thank you very much.

And if trans liberation means excluding some trans people and including others, finding new ways to marginalize people who don’t fit into our idea of what transition should look like – you can take your liberation and shove it.

The trans community doesn’t need gatekeepers who get to decide who is “trans enough” and who is not. We are all trans enough, and our truths are for us to declare and decide.

If we, as a community, are asking the world to respect our identities, it is hypocritical to disrespect the identities of others in our community. And if we, as a community, are asking for the freedom to express our (a)gender in whatever way feels authentic, we must respect the journeys that our other trans siblings are on, regardless of how similar or dissimilar to our own they might look.

My body is not public property – it’s not a public spectacle for people to objectify and misgender. It’s not a blueprint for you to impose your outdated ideas of what a transition should look like. And it’s not a lump of clay that you get to mold into something that makes you feel more comfortable.

My body is mine. And further, my legitimacy and validity as a trans person is not contingent on what my body looks like on any given day.

“Transtrender” is a word no person in this community should ever use or condone. Someone should douse it in gasoline, set it on fire, and let it burn (metaphorically, of course).

My trans liberation looks like this: A community that welcomes, respects, validates, and uplifts everyone who finds a home there. And a world that, regardless of our bodies and regardless of our journeys, lets us reclaim ownership of our identities and our bodies.

Because if we tell our trans siblings that their identities do not belong to them, we perpetuate a culture where the naming and claiming of our identities belongs to someone else.

And I promise you, that is not liberation. That is not progress.

In fact, I’m pretty sure that’s where we started.

This article was reposted from ‘Let’s Queer Things Up‘ and can also be found here —> Why the Trans Community Needs to Ban the Word “Transtrender” for Good. 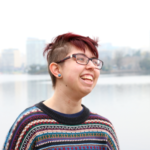 Sam Dylan Finch is a queer activist and feminist writer, based in the SF Bay. He is the founder of Let’s Queer Things Up!, his blog and labor of love. With a passion for impacting change through personal narrative, Sam writes about his struggles and triumphs as genderqueer and bipolar with the hopes of teaching others about his identity and community. When he isn’t writing, he’s probably eating takeout and dancing to Taylor Swift.