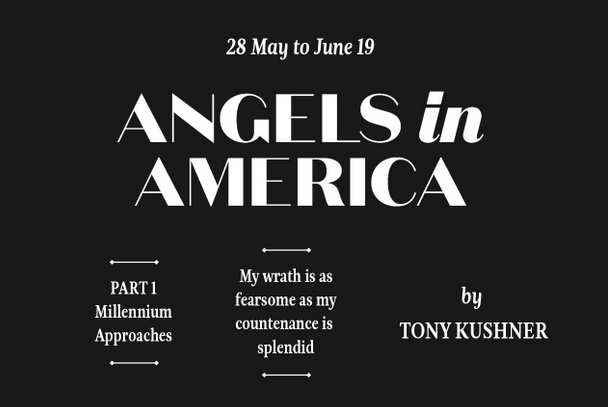 Angels in America, Part 1 Millennium Approaches, one of the most important and groundbreaking plays of the 20th century, made it’s WA premier over the weekend at the Heath Ledger Theatre in Perth.

Set in 1985 New York City, the play explores the intertwining lives of those affected by HIV/AIDS amidst the AIDS crisis of the 80’s and 90’s. Prior Walter takes centre stage, diagnosed with AIDS and left by his lover Louis Ironson. Walter is then visited by an angel who brands him a prophet, tasked with saving humanity.

Tony Kushner’s iconic play, Angels in America, has won many awards including the Tony Award for Best Play, twice, and the Pulitzer Prize for Drama. It was made into a mini series in 2003 starring an array of well known names such as Al Pacino and Meryl Streep and for which it won 11 Emmy awards, a record at the time. Most importantly though, the stories told in the play depict the very realities of people who have been affected by HIV/AIDS.

It’s impossible, for those who haven’t been personally affected, to know exactly how it feels to be living with, or know someone who is living with HIV/AIDS. And because of this, any theatre company taking on Angels in America, is tasked with upholding the name of a prestigious and historic play, with stories so close to the hearts of  many. I’m so glad to say, upon watching the Black Swan State theatre Company’s rendition, it went well beyond my highest expectations. From the passion from each cast member, to the lighting, sound, costumes and set design that completed every scene, the production as a whole was impressive, and the hard work that went into every aspect of the play was more than evident. It felt like Broadway had come to Perth, and that’s not something I think anyone should miss.

Angels in America is playing at the Heath Ledger Theatre from Saturday 28 May to Sunday 19 June 2016 as part of Black Swan State Theatre Company’s 2016 Winter Arts Festival . For more information and to buy tickets head to Ticketek.com.au.