If I had to say just one thing about Fringe’s Le Gateau Chocolat: I Heart Chocolat, it would be: go see it…Next year! That’s right folks, if you’re from Perth then unfortunately you’ve missed out. Be sure to be first in line for the show if it comes back though because after this years performance I’m sure the tickets will be selling fast. Le Gateau Chocolat may have left Perth, but I’m still hearing chatter about how amazing the show was.

I made the last minute decision to buy a ticket for Friday’s opening night performance, despite it also being Perth Fringe World Festival’s opening night, and therefore packed! 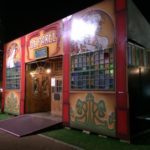 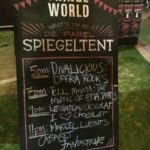 The line to get into De Parel Spiegeltent ran almost the length of Perth Cultural Centre’s Urban Orchard at 8:30pm for a 9pm start. The seats were soon filled, and the show began with quiete and polite introducions from the queen herself,  offering what looked like maltesers from a large glass bowl. Fast forward five minutes and she was on stage singing ‘Suck on my chocolate salty balls” and the crowd couldn’t have been laughing harder. This was just the start.

Add a number of sparkeld costume changes, songs picked by the audience via their choice of chocolate, a dalmation onseie, a shortened comedy version of Le Miserables (how fucking miserable) and one of the most amzingly deep voices I’ve ever heard, and you have yourself one of the best Fringe shows I’ve seen. What a show to begin the Fringe season with. No wonder people are still talking about this sassy, talented, cabaret singing goddess.

Le Gateau Chocolat is currently continuing on the Fringe trail in Adelaide after an extended stay in Perth, taking in all the Perth Fringe goodness. Head to their Facebook page to keep up to date with all things chocolat! (Le Gateau Chocolate).