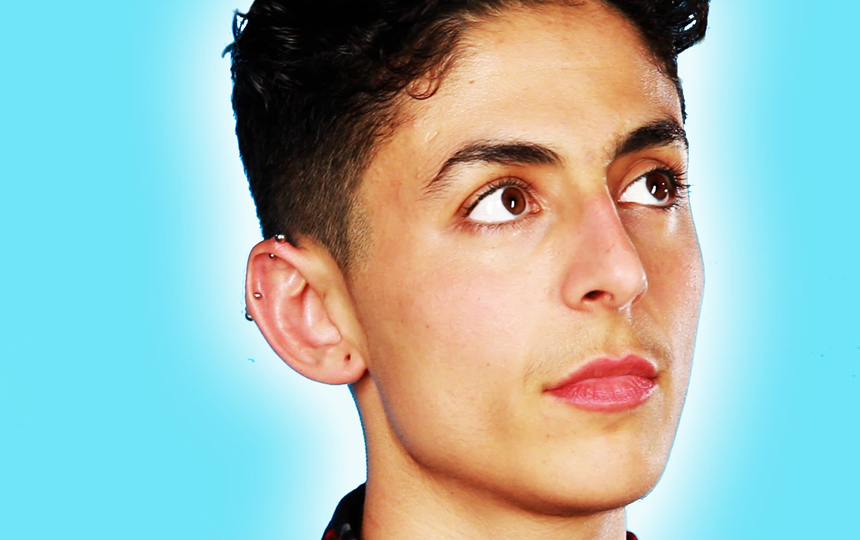 To celebrate Intersex Awareness Day (October 26), we had a chat with Intersex activist, artist and consultant Pidgeon Pagonis about recent shifts in intersex awareness, how they met Jill Soloway at the White House and got a role on the TV show Transparent, their NEW YouTube channel and more!

Firstly, a lot of people are still ill-informed or confused about what it means to be intersex. What is your definition of intersex?
To me it’s just any body born with sex genitalia, chromosomes or reproductive organs that don’t fit either the male or female binary. That happens in about 1 in 2000 births at the high end of the statistics. So it’s quite common, just like the same amount of natural born red heads.

You’re intersex yourself, and you’re so involved in advocating for the rights of intersex people. How important do you think it is for people to advocate for themselves and the rights of the community/s they are a part of?
I think it’s extremely important. I think for intersex we’ve had a great lack of self-representation for a long time even though there have been intersex people advocating for themselves since the early 90s, possibly before then. I think lately, the past few years, there’s been a great surge or up swell of intersex people, young and old, all across the board in age, and the world coming out and openly and proudly identifying as intersex and sharing their stories in a variety of different ways. Even a few years ago when I was working with a youth project called InterACT, a lot of the youth were using pseudonyms and not putting their pictures online or doing video interviews. It’s very exciting to hopefully be able to live through the near future when our message gets across that these are human rights violations, that these surgeries need to be left up to the choice of the individual and not the surgeons.

Can you pinpoint any major events recently that have paved the way for this change?
I believe it’s been a building up of sorts for maybe five years now. I think if we were just to look at the media, and to look at popular media, I think the Buzzfeed video and the MTV representation [Faking It] were very helpful for some younger people and older people to have a representation of themselves on television that was complex and wasn’t just like the usual representation we get on TV which is like a brief mention or some scientific medical condition that’s hermaphroditic and weird. [In Faking It] she was a young woman who is charismatic and sassy and full of complications in her personality and identity. I think it’s a tide shift with the world becoming more aware of trans identities and other identities on the spectrum. That coupled with some lucky breaks and opportunities with Buzzfeed and MTV and some other media like more traditional media, we’ve just gotten to a point where we’re starting to enter general people’s conversation now and it’s been quite amazing.

To carry on from that, you’ve recently appeared on an episode of the popular TV show Transparent. How did that come about?
So my old boss at Inter-ACT, Kimberly Zieselman, nominated me for a LGBTQ artist award at the White House. When I got the award at the White House, I literally bumped into the director and creator of the show Transparent, in the line for security.  She was like hey, I follow you on Twitter can we take a selfie, I’m a fan. I was like OK. Things snowballed from there. I kind of whispered into Jill’s ear like hey you should put an intersex character in your show thinking about the success of the Faking It character. I was nudging her because she seemed really cool and receptive. We kept in touch here and there on social media and she hit me up one day and she said hey we took you up on your suggestion. We wrote a character based on you, we want you to film it in February. And I was like hell yeah I will drop anything to fly out to Hollywood in the middle of Chicago’s winter and advocate on behalf of intersex people on such an amazing platform. Jill’s an amazing ally to the intersex community and I hope to continue working with them in different ways. Jill’s just down to help in any way possible.

Not only are you an intersex activist, but also an artist and consultant. Are any two days the same for you, and how do you make each of these roles fit in with each other?
Well they all fit in with each other, it’s all for the message that intersex is beautiful, intersex is natural, it’s not something to be ashamed of, it’s not something to do surgery to, it doesn’t need to be fixed. So everything I do is to further that message and to ultimately end surgeries. But there’s never two days that are alike and I kind of built my life that way, I want it to be like that. It helps me function. At the same time it’s hard, there’s challenges to that as well. You can feel lost sometimes. You can feel like you’re not getting things done, you’re not helping, you’re not being productive, and you’re not using your time to its full advantage. You can kind of be looked at like you don’t really do work because you’re freelancing so there’s that stigma of constantly feeling like I have to defend myself to let people know I am working.

What do you do in terms of self-care to make sure you can keep doing the work you do?
I think it’s important to have indicators, to know when to stop and to actually stop and to get work done in shorter spurts of time that are more productive and to have healthy time away from the computer and time away from writing and projects and advocacy and all that. Things that have helped me clear my mind and my body and reset are yoga, running, photography, being around friends and family and eating healthy. Doing artistic stuff like watercolours’ that can then lead into the advocacy work but, just painting with watercolour is just really relaxing. Meditation and self-affirmations are really important too. Having routines, and organisation and cleaning, and having a clean organised space too, and having my dog. She gives me routine, she gives me someone to care about and she cares about me back so it’s a mutual thing. She really makes me happy and loves me and I love her. I think pets are very important for intersex people, especially the ones that can’t have children, that are infertile. They’re important for everybody of course but I think I’ve noticed in my community they’re very very important and for me that’s definitely true. So, those are like the main ways. Oh and also teach. I touched my toes into the world of being a professor this year.

You’ve just started a YouTube channel talking about your experiences as an intersex person. Why did you decide to start the channel and is this something you have been meaning to do for a while?
I thought about the YouTube thing for a long time, maybe a year or more, and then I started to get serious about it and last time I was in New York. That was last May, I just released my first video like, two weeks ago *laughs*. But I felt so happy, like oh my god I did it. I’m really excited because I love opening new avenues that can spread intersex awareness and support and so far it already seems like one of the most intimate avenues. To me film making is one of my favourite mediums. I love documentaries, I love learning from documentaries and then I love the technical aspect of film and photography so, I get to put all those together and spread intersex awareness so it’s like a win win situation.

What is your focus right now when educating people on intersex rights?
Of all systems of oppression, intersex is just one of them and I try to link identity politics with two that I’m invested in. One, I’m part Mexican and part Greek, so I try to show people the linkages between how being brown in a white supremacist culture, is a direct threat to white supremacy. I link that with intersex oppression where intersex bodies are a direct threat to the heteronormative structure in society and so the medical industry tries to erase our bodies off the map because it poses a threat to that false binary of sex and gender. And so I try to provide that linkage for people by using my own identities and also speaking to the current movement of Black Lives Matter and civil rights more broadly. Intersex is a human rights issue, but also it’s part of many civil rights issues of our time and in the past and we need to be aware simultaneously of other movements as well and how we’re not the only people experiencing oppression. The main message would be to let intersex people have bodily justice and autonomy of their bodies and to end these surgeries immediately.

What will you be doing for Intersex Awareness Day this year?
Honestly probably nothing *laughs*. It’s going to be more of a self-care day. I’m going to meet up with other intersex people in New York and we are going to have pizza and beer. Pizza is my favourite food, one of them. So, I’m literally going to take it as a day to just hang out with intersex family, to reflect since last Intersex Awareness Day to today, and just the whole past.

Aside from yourself, who are some other amazing intersex people you’d recommend following the work of?
Juliana Huxtable, an intersex artist and genius, Lynnell Stephani Long, Saifa Wall who was in the BuzzFeed video, Emily Quinn who’s also in the video. I really love Mani Mitchell; they are from New Zealand and they have documentaries that they have been featured in and also have been the host of and they have been in really good photo projects like one that says I am not a monster across their body. They are a mentor of mine and I think they symbolize the highest form of the movement. They’re really about healing and love and they’re a therapist, they’re intersex and they live out intersex daily in their body. They don’t pass, they have a beard, they have a high pitched “feminine” voice; they’re amazing! I really love Julius Kaggwa in Uganda and the work that they do. I really love Hiker Chiu in Taiwan. They have a project called free hugs with intersex and they give people hugs when they wear that t-shirt and they give people presents and they’re just very nice. There’s someone in China named Small Luk; she’s amazing. Claudia Astorino in New York, Hida Viloria in New Mexico, they’re coming out with a book. Georgiann Davis is another academic person who just wrote a book recently. And then InterACT is a really good organisation to follow, they’re legit, and OII International.

To find out more about Pidgeon Pagonis, head to pidgeonismy.name. Also, be sure to head to their shop where they have some amazing shirts including the ever popular “too cute to be binary” design. And lastly, remember, intersex stories not surgeries! Thanks Pidgeon for chatting with us. Happy Intersex Awareness Day everyone!