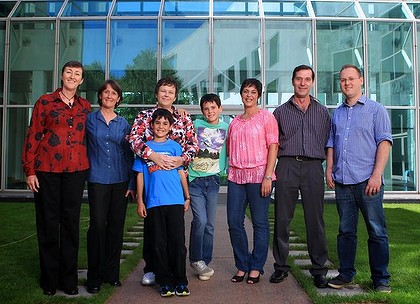 Sandy Miller and Louise Bucke brought their sons Matthew Miller, 12, and Dylan Miller, 9, to the dinner, who  expressed their concern as to why their mothers and other same-sex couples can’t get married.

“I don’t know really why I am here,” Matthew said. “To me, it is simple and this argument should have been settled long ago. People should be allowed to marry the person they love and to be accepted by all society.”

Dylan had previously written to the Prime Minister on the issue but was glad to be able to express his feelings in person.

“I just want her to have a think how much it would hurt her if she couldn’t marry the person she loves most in the whole world,” he said

Ms Miller added that although Gillard is still against same-sex marriage, the meeting itself was a positive step.

“It was a very positive discussion and it gives me hope for the future,” Ms Miller said.

“This will happen one day. I have always been certain of it and I am more certain now.”

The other two couples, Sharon Dane, 54, and her partner Elaine Crump, 53, and John Dini and partner Steve Russell, were also very positive about the meeting.

A spokeswoman for the PM added the following statement regarding Labour’s position.

“The Labor Party’s position on this is clear. When the private members’ bills on same-sex marriage come to a vote, Labor MPs will be able to vote according to their conscience.”