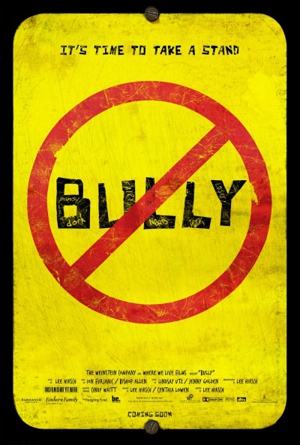 I think it’s safe to say everyone has experienced bullying in one way or another. Whether you were being bullied, you were the bully or you were someone on the sidelines.  In the past and even in present times we’ve seen this being attributed to maturity, child’s play or that ‘boys will be boys’ sentiment, but why? Is it really ok for a kid/s to taunt, tease and bully another kid simply because of their age or their maturity level? And what about the effects of bullying? Does the name Tyler Clementi sound familiar to you? What about Seth Walsh or Rafael Morelos? The list could go on and on, and it’s a list of teens who have committed suicide because of bullying.

The idea that bullying is just a part of life has to be stopped. It shouldn’t be the deaths of our youths that work as a wake up to us all. We should all be doing something before it gets to this stage.

I was watching a clip from the Ellen Degeneres show recently and she was talking about a soon to be released documentary she’d seen called ‘Bully.’ Going by her words it seems like a very interesting and eye opening documentary about just how much bullying is going on in the United States today. However, because of its R rating, schools cannot show the documentary, meaning the people who need to see it the most, the kids, won’t get the opportunity to.

“There is some language in the movie, it’s mature but it’s not gratuitous. It’s in the movie because it’s part of the real story of bullying and it’s real language that bullies are using,” Ellen said.

I went and looked at the preview of the documentary and although I haven’t seen the whole thing, its intent seems clear – to stop bullying. How can there be an R rating on that? Why should a rating system stop kids from seeing a movie that could potentially change their lives? I’m sure many kids, if they had the opportunity to watch the documentary would see just how similar it is to what they’ve experienced at school, online or in the playground and be changed by its message.

Katy Butler, a formerly bullied high school student from Michigan has started a petition to change the rating from R to PG-13.

In the petition she states: “I can’t believe the MPAA is blocking millions of teenagers from seeing a movie that could change — and, in some cases, save — their lives. According to the film’s website, over 13 million kids will be bullied this year alone. Think of how many of these kids could benefit from seeing this film, especially if it is shown in schools?”

What she’s saying makes sense as does trying in every way possible to prevent bullying and its potential effects. So a kid hears a few bad words, it’s nothing most haven’t heard before and isn’t it worth it to change lives, to save lives?

If you wan to sign the petition visit www.change.org. The petition is entitled “MPAA: Don’t let the bullies win! Give ‘Bully’ a PG-13 insead of an R rating.” Bullying should not be a part of everyday life and through texts like this one; kids should have the opportunity to learn more about the issude. Be the difference.