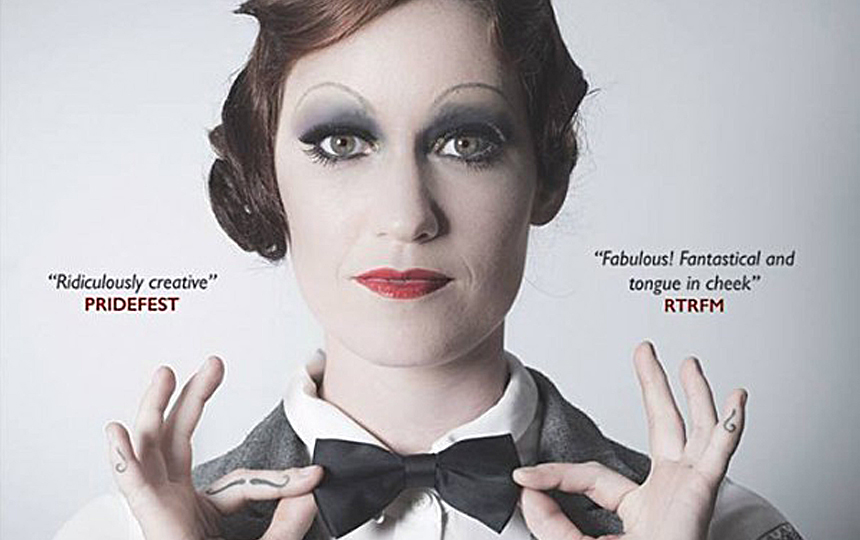 Nestled in the corner of The Rosemount Hotel is Four5Nine Bar, a cosy space home to many Fringe World performances this season including Lexie McGee’s debut show; “PANTS! (and other things). I had the pleasure of going to see the show on Monday night, the third of five performances gracing the Fringe World stage, surrounded by an almost sold out crowd. Launching her self-titled debut EP, the show follows the thoughts, ideas and teachings of Lexie as she navigates her way through topics such as gender diversity, gay mermen and bowl cuts, through song and, of course, interpretive dance.

The show begins with musician Maisie on stage alone with a guitar, playing the sweet introduction of the show’s first song. Lexie makes her first and very sudden appearance by bursting through the stage curtain, wide eyed and dapperly dressed, glitter and the colour red obviously key features in her outfit. The song was slow to begin, though soon picked up once the interpretive dancing kicked in, leaving the audience in fits of laughter with ever bodily thrust or flutter.

Each song contained refreshing bursts of honesty and new found levels of hilarity, told in the effortlessly beautiful voice of Lexie and soul felt strumming of Maisie. From asking the tough questions in life like “Why would you give your kid a rat tale?” to contemplating life as a gay merman on the D floor under the sea, there really was a diverse range of imaginative wonderings and teachings the majority of us couldn’t even dream of coming up with as a child, alone in our bedroom, let alone as a grown human being.

Though the genius writing behind the song “Pants” really blew me away, my favourite song for the night would have to have been “Rainbow”, a song in which Lexie challenges the idea that colours and interests can/should be connected to ones gender and/or sexuality. Though I would have liked to see people’s ideas of sex, i.e. intersex variations challenged on a deeper level in the show, I understand the time constraints of a 50 minute show couldn’t have been easy, and applaud Lexie for committing to teaching and making people question ideas around sexuality, gender and diversity. I would highly recommend seeing this show to challenge yourself, celebrate diversity, learn some info along the way but most importantly to have fun and a laugh.

Tonight is your last chance to see PANTS (and other things) at Fringe World. To buy tickets, click here