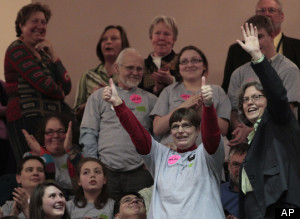 The Washington State Senate Passed a bill on Wednesday that will legalize same sex marriage.

Gov. Chris Gregoire supports the measure and has agreed to sign it into law when it gets to the House.

Applause broke out in the public galleries when the Senate passed the measure, a 28-21 vote.

“Marriage is how society says you are a family” he said.

Sen. Dan Swecker, R-Rochester argued against same sex marriage saying it will change the definition of marriage and “will lead to the silencing of those who believe in traditional marriage.”

A referendum clause has been rejected, meaning opponents will have to wait to file a challenge once the law is passed.

If opponents aren’t able to gather enough signatures, same sex couples will be able to get married starting June.