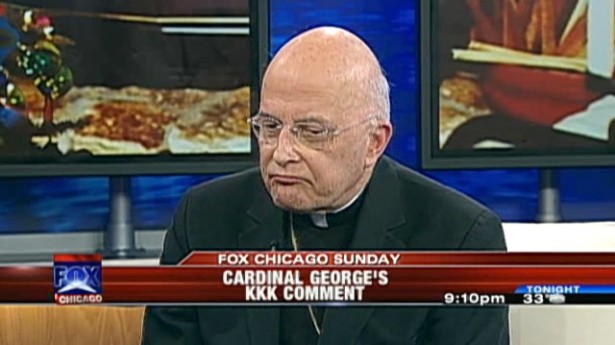 Cardinal Francis George has apologized to the LGBT Community for comparing them to the Ku Klux Klan.

“I am truly sorry for the hurt my remarks have caused, particularly because we all have friends or family members who are gay and lesbian,” said Cardinal George according to the Chicago Tribune.

“This has evidently wounded a good number of people. I have family members myself who are gay and lesbian, so it’s part of our lives. So I’m sorry for the hurt.”

“As we know him as our bishop, we know that it is sincere and that he will work to avoid making such damaging and hurtful remarks in the future,” said Pett.

Truth Wins Out, an organization running a petition for Cardinal George’s resignation are still unhappy with his original statement and have placed a full page ad in the Chicago Tribune.

There has been no mention from Cardinal George about resigning from his position.