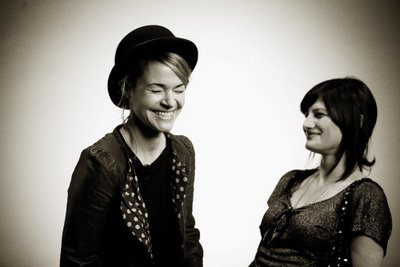 So here I am trying to think of interesting individuals to talk about and the name Leisha Hailey comes to mind. Anyone who is a fan of the show The L Word will know exactly who I am talking about.

Leisha Hailey played Alice Pieszecki in the show, a funny,  quirky, usually loud, bisexual freelance writer, living in Los Angeles.  It is her most well known role to date with the show itself a huge success in the queer community world-wide. Not only did it contain an all female lead cast, but also an all queer identified cast. I can probably count the amount of times this has happened on one hand, which is saying something…”WATCH IT.”

Since then, Hailey  has appeared in a couple of CSI episodes, played the voice of Lily on ‘American Dad’ and more memorably Emily Weaver in the 2011 movie ‘Fertile Ground‘ just to name a few. However, her acting career has for the most part been put on the back bench while she has been concentrating more on her music. Teamed with musician Camila Grey, in 2007 the band Uh Huh Her was formed.

In 2011 it came out (pun totally intended) that her and her “band mate” Grey were more than just friends. Remember Hailey’s PDA plane incident last year where her and her partner were asked to leave the plane for kissing? Well it was Grey on the other end of that affection.

Anyway, I digress. Uh Huh Her have released two EPs and two albums. I can’t say much for their 2011 album Nocturnes as I haven’t listened to it much, however I can say that their 2008 album Common Reaction is very addictive! ‘Wait Another Day’ and ‘Everyone’ are my favourite songs.

They are still yet to have made it to my home city; Perth (or Australia to my knowledge) but I still have my fingers crossed.