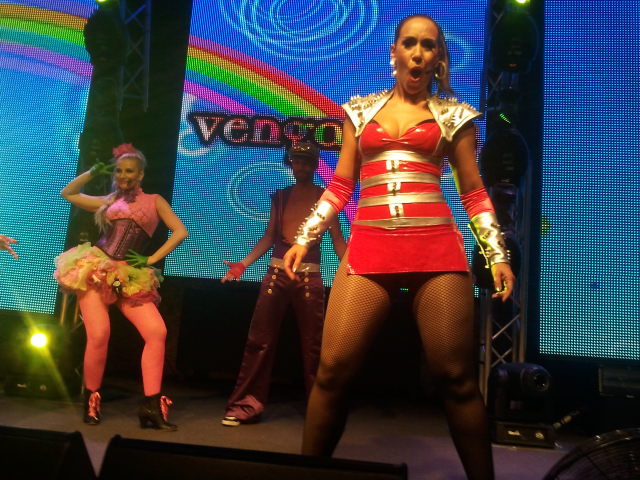 Last night I saw the Vengaboys. You remember them, don’t you? The late 90’s Eurodance, few-hit wonders. Of course you remember such classics as “Boom! Boom! Boom! Boom!” and “We Like To Party”, spawned from their 1998 debut “The Party Album!” I, for one, remember that my suburban, Australian childhood was filled with these cheesy, Euro, club songs for some reason. The songs were silly and catchy and I suspect that the primary motivation for people seeing them in 2012 is for a dose of pure, sing-along, nostalgia. Apparently the Vengaboys enjoy partying, and party they did at their show at Metropolis Fremantle, in 2012, over ten years since their last release.

The sold out crowd was packed into Metro’s, waiting in keen anticipation for their slice of the 90’s. This was only heightened by the support DJs who played an impressive mix of 90’s dance-pop classics. Despite the sweltering heat and the crowd being covered in sweat before the headliners even made the stage, the atmosphere was of fun and anticipation, enhanced by the nostalgic music selections. Choices such as “Be My Lover” by La Bouche set the tone for the Vengaboys, and when they bounced on stage, looking like they (and their fashion sense) had not changed since 1999, the crowd when wild.

As they launched into “Boom! Boom! Boom! Boom!” the crowd went absolutely mental as the foursome, dressed in enough latex to supply a condom factory, executed their meticulous choreography and lip synced their little Dutch hearts out. Lead singer Kim, dressed in a futuristic, red and silver, latex ensemble dominated the stage, accompanied by her backups:  Denis, the other female in the group and the ever-changing guys who are the campest, most sequined cowboy and sailor ever. They sang and danced through all of the old favourites including “We’re Going to Ibiza”, “Shalala Lala”, “Uncle John From Jamaica”, and so did the crowd. When faced with having to introduce a new song,  “Rocket To Uranus”, Kim taught the audience the dance to go with it, a smart move which still enabled crowd-participation in this largely unknown new song.  At the end of their set, Kim proudly proclaimed, “We are the Vengaboys and we represent cheesy, sleazy Eurotrash pop music!” before launching into “We Like To Party”, their last song and biggest hit. Jets of glitter confetti rained down on the audience, and everyone screamed so intensely after they left the stage, that the Vengaboys encored with “Boom! Boom! Boom! Boom!” Again. But nobody cared, because it was AWESOME.

The success of this 90’s throwback show resulted in last night’s gig being sold out, with another one scheduled for tonight. The Vengaboys concert was a fantastic, fun night out and due to the success of it, I predict that a new trend for promoters this year will be to bring out nostalgia acts and market them to people who remember the music from their youth. It’s working; I already have tickets to see 90’s Danish pop act Aqua in March!