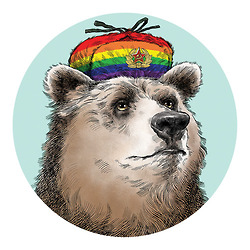 Anna Goodson, CEO & Founder of the Anna Goodson Illustration Agency, called for illustrations from the group recently after being disturbed by sexuality based discrimination in Russia. President Vladimir Putin signed a law at the end of June, banning the distribution of “propaganda of non-traditional sexual relations” to minors. With Russia hosting the Winter Olympics,  major concerns have been raised for the safety of athletes and tourists alike. “We are often asked to create images for clients but here was an opportunity for them to create something meaningful, personal and from the heart,” said Goodson. “We believe that Art Speaks Louder Than Words and we wanted to show the world that our agency and illustrators don’t support discrimination and violence of any kind, regardless of Religion, Race or Sexual Orientation.” Check out some of the amazing submissions!